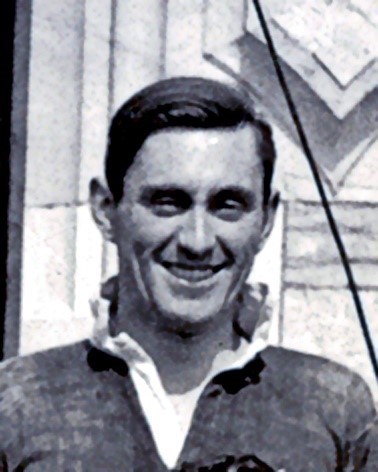 OPM Rugby are sad to announce the passing away of former player and Vice President Dave Smale.

Memories of Dave come from his son, and a former Captain of OPM RFC, Pete Smale.

‘I never realised how difficult this would be to write. It isn’t (as most of those reading this and who know me might suspect) my limited vocabulary, the limit comes with the space given and the amount that our Dad did. As with his eulogy, I can’t mention everyone that Dad knew so even a potted history of the things that Tim and I remember will need to be edited down.

At school, Dad boarded at Colson House and was an active sporting member of College House winning the Cock House Trophy, he represented both School First XV at Rugby and First XI at Cricket. He was also a member of the School CCF and a member of the shooting team winning the Empire medal. During WW2, he was a fire watcher – we still have shrapnel from an incendiary bomb that hit the family home – he ran away to join the Parachute regiment but was rumbled as too young and returned home. On leaving school, he went to Seale Hayne Agricultural College to study farming and achieved a National Diploma in Agriculture. On leaving college, he worked on several farms around the local area. To cut a long story short, our Grandfather asked him to join the family business which he did.

Throughout all of this, he remained faithful to the game, playing for Seale Hayne and then for many seasons, OPMs winning the Lockie Cup twice – a feat that neither Tim nor I could emulate. Dad remained a Vice President of the Rugby Club whilst not attending matches in recent years, he took part in the VP’s days and Senior Dine ins at the OPM Suite. Dad’s legacy continued with both Tim and I playing for the First XV, Grandson Fred also plays for the 1st XV, his youngest grandson Matt is currently involved with the Colts in the Junior Section, he is also in vying for selection with both Devon and Exeter Chiefs.

Dad played in the front row and at this point, let’s not forget that this was a time when Rugby was coarse and the rules were a set of loosely translated guidelines. The front rows would come together with enough force to blow the wax clean out of your ears. He played with a young Owen Walters who both Tim and I played with in our early days. The thing that is more astonishing here is that given his stature - Dad was 5’11”, weighed 16 stones soaking wet and had a waist measurement of 28” – built like a Drover’s dog (another one of his) a description usually followed by a more detailed explanation involving ribs and wedding tackle. Remember that this was a time when players could be easily identified by their appearance – forwards by musculature and intellect whereas the backs were identifiable by hair, shoes and make up – Dad was a very strong and aggressive player.

Around town, Dad was well known which was a distinct disadvantage to my brother and I as we couldn’t go anywhere or do anything without him finding out about it. Long standing friendships were important to Dad, wherever he went he was well met, he made friends easily and always had a laugh. In conversation he was informed and interesting and it goes without saying that in all his relationships he was honest, true and loyal. He was fiercely proud of everything that his family have done.

He was a constant in our lives and involved us and was interested in everything we did. We fondly look back at shooting, fishing trips, holidays and of course, Mother Ivey’s Bay.

He will be sorely missed but fondly remembered.’