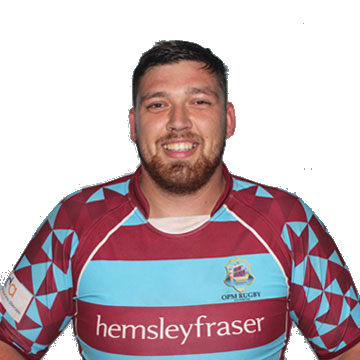 We hadn’t played them in a long time competitively before our last meeting and my god what a turn around !

We went into today’s game with a team that was definitely off from our strongest. Despite this you boys performed ! Two lads deserve a big shout out today. Two lads who have been predominantly 2nd team players but have put the effort in at training and been recognised, today put in an absolute shift ! Peter Marr with a well deserved Man Of The Match game with Daniel Bristow in a close 2nd but definitely earning the golden bat for the first time.

First try came very late on in the second half from the amazing Chris Harmer with a tidy little finish down the wing in the corner.
This try was the turning point of today’s game and gave us the boost we needed to see it out.

Second try was a very well worked line out maul which Simon Bray gladly took at the back hanging on for dear life until we shoved him over the whitewash to put OPM 10-0 up.

Backs again then decided they wanted some more action so decided to Chuck the absolute monster that is Toetu'u Kafohiva Vaka up the middle to put us in for our 3rd try.

4th try was 100% a bit of magical brilliance from the amazing Fred Smal with an absolute fluke of a try that amazed and shocked everyone..... including Fred.

5th try came from the restart of Fred’s wonder try with a cheeky carry from the midget Matthew Morgan, selling a dummy and not listening to the two backs outside him was the right choice. He then decided (after his little legs couldn’t take him any further) to give the pass to Ollie Dustpan who then linked up very well with Paul William to go in for our 5th try of the game.

A shout out must also go to Sam Matts and Peter Regan who played 9 and 10 today. Both of you boys made the right decisions at the right time and kept everyone composed when needed. For that we thank you. Sam managed to get himself on the score board with 3 conversions despite the shitty wind we had to deal with.

Massive day for the club today turning out 3 teams !! From here we go forward. Thank you to everyone that put on a jersey today but a bigger thank you to the people behind the scenes. Without them this club wouldn’t function.

I’m definitely one happy captain and that’s all down to the 65 players putting on that jersey today. THANK YOU !!